Apologies to those of you who received the “You’re a Good Man, Charles Schulz” blog two weeks in a row. I’m still learning the WordPress way of doing things and temporarily posted this blog immediately rather than scheduling it for the next week. To quote Charlie Brown, “Good grief!” Bill 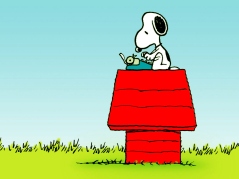 I miss Charlie Brown and the gang. The antics of the Peanuts’ cartoon characters created joyful moments of laughter for many. When Charles Schulz died in 2000, the whole world grieved. Today the Sunday funny papers continue to carry reruns of the famous comic strip in Schulz’s honor.

Peanuts first appeared in syndicated form on October 2, 1950. The comic strip eventually ran in more than 2,600 newspapers across 75 countries. The characters are instantly recognizable around the world. Charlie Brown’s “Good griefs,” Snoopy’s flights of fancy, and Lucy’s crabbiness touched something deep inside us all.

I am a lifelong Peanuts fan. I followed the comic strip before I could read, begging my parents to help me with the words. The first 33 rpm record I ever owned was Snoopy Versus the Red Baron by the Royal Guardsmen. (For younger generations, record albums were vinyl discs played at thirty-three revolutions per minute on a record player—ask your parents.)

The holidays are not complete at our house without the traditional viewing of A Charlie Brown Christmas. Linus’ retelling of the Christ’s birth is a sacred moment in a secular medium. I also continue to enjoy It’s the Great Pumpkin, Charlie Brown at Halloween. While all the other kids receive candy, Charlie Brown forlornly reports: “I got a rock!”

Charles Schulz is my favorite theologian. He taught me more about life and faith than all of my professors in seminary combined. Charlie Brown and the gang wrestled with soul challenging issues like good, evil, faith, doubt, heaven, hell, generosity, and meanness.

I do have some regrets. In a world that ended And they lived happily ever after, Linus would finally meet the Great Pumpkin on Halloween night. Snoopy would get the Red Baron in his sights. Lucy and Schroeder would grow up, get married, and have children, and Linus would finally fall in love with Sally.

In a perfect world, Charlie Brown would have pitched a no hitter and led his team to a Little League championship. On Valentine’s Day, his mailbox would be filled with cards. In the fall, he would kick Lucy’s football half a mile. At the school dance, he would have kissed the little red haired girl.

He never got to do any of these things; but he never gave up. The “blockhead” with the thorn emblazoned tee-shirt got up every time he fell. Although Charlie Brown always lost, he never became a loser. Instead, he represented the child still alive in each of us.

I am thankful that Charlie Brown and Snoopy did not die with their creator. The things they taught me as a child continue to be impressed upon a new generation. These are invaluable lessons worth repeating.

The Bible reveals that the Lord’s prophets come in a surprising variety of shapes and sizes. Most of them have little to commend them from a human perspective for divine work. Yet the Almighty possesses a knack for calling the least, last, and lost for his purposes. The one thing these men and women share in common is a burning desire to proclaim God’s Word.

Prophets abound outside the pages of Scripture. They live at the intersection of God’s Word and our world. In grace filled moments, the transcendent becomes incarnate in their words.

The Lord certainly possesses a sense of humor, and I have no doubt he delighted in each member of the Peanuts’ gang. The little round headed kid along with his hound of heaven revealed to us eternal truths.

Our January worship series at First United Methodist Church of Lawrenceville is entitled All In! We are exploring what it means to love God with ALL of our heart, soul, mind, and strength (Mark 12:28-31).

One of the books I read in preparation for the series is entitled All In by Mark Batterson. Mark is the founding pastor of National Community Church in Washington, D. C. The multi-campus congregation reaches tens of thousands weekly at our nation’s capital.

I traveled with a group of Methodist clergy to D. C. last fall, and we had the opportunity to see Mark Batterson. The meeting occurred in a coffee shop the church founded near Capitol Hill named Ebenezer’s. The business/church embodies the innovative spirit of ministry National Community Church practices.

Batterson has published several books, and he is an excellent word smith. (As a sometimes author, I confess to the sins of covetousness and envy over his talent to turn a phrase!)

Here are some quotes from All In that have continued to challenge me as a Christian and pastor:

Batterson’s emphasis on total commitment reflects John Wesley’s preaching on Christian perfection. He believed God had raised up the people called Methodists to spread scriptural holiness throughout the land.

At ordination, the first questions United Methodist clergy must answer with a resounding “Yes” include:

After thirty-three years of ministry, I must confess my commitment to these standards varies on a regular basis. On my best days, I come close to approximating an affirmative response to Wesley’s questions. On my worst days, I fail abysmally.

I have always appreciated John’s words which reflect both the goal and reality of Christian discipleship. He begins by writing: My dear children, I write this to you so that you will not sin. Then the prophet turns pastor as he continues: But if anybody does sin, we have one who speaks to the Father in our defense—Jesus Christ the Righteous One (1 John 2:1-2).

The goal is to become perfect in loving God and others. The reality is our daily lives. However, the latter never excuses us from pursuing the former with our entire being.

After asking if ordinands were going on to perfection, Bishop William Cannon would pause and add: If you’re not moving towards perfection, then what direction are you headed?

What direction ARE we headed? The Holy Spirit woos, calls, nags, and challenges us to go ALL IN for God.

Reverberations of bouncing basketballs on a high school gym floor. Tree limbs rubbing their hands together to stay warm. Sighing, shifting, sizzle, crackle, cackle of logs in the fire. A teapot’s wolf-whistle and a crock pot’s teeth chattering. Children’s excited clamor at the first sighting of snow flurries.

Backing up to a blazing fire. A body outline of warmth slowly spreading under sheets and blankets. Chapped lips and dry skin. Static kissed clothes clinging to skin. Frigid car seats chilling the back of one’s front.

During these winter months,  look, listen, smell, touch, and taste  that the Lord is good!

New Year’s creates the illusion of fresh starts and new beginnings. Like a lawn covered with freshly fallen snow, 2015 stretches before us without footprint or trail. We can choose anew the direction of our lives and the pathways for our feet.

On New Year’s Day, change seems possible as we resolve to make this year different from the last. So we make ambitious New Year’s resolutions about diets, exercise, habits, church, money, vocation, and more.

Resolutions born at midnight on December 31st, however, seldom survive the first few weeks of reality. Habit is a hard master to overthrow. Even if a rut is a grave with two ends missing, it is still OUR rut, comfortable and cozy. By mid-January, the new and improved versions of our lives will greatly resemble the old and not so improved models.

After 33 years as a pastor, I have learned two polar opposite truths about fallen human beings:

The third chapter of John’s gospel describes how Nicodemus, a Pharisee and member of the Jewish ruling council, visited Jesus at night. Christ told the religious leader: I tell you the truth, no one can see the kingdom of God unless he is born again.

In Christ’s life, death, and resurrection, God has formed a new covenant/relationship with humanity. God so loved the world that he gave his only Son—and if God gave his only Son, will he not also give us all other things besides?

People tend not to change on their own, but God can radically transform people! Paul wrote: Therefore, if anyone is in Christ, he is a new creation; the old has gone and the new has come! (2 Cor. 5:17)

The first and last word of the Gospel is grace—God gives freely. However, the divine initiative demands a human response.

God has gone all in for us. In turn, we are challenged to go all in for Jesus Christ, our Savior and Lord. Let me warn you from the start that the price is HIGH—it will cost everything we’ve got. However, what we receive in return is PRICELESS and ETERNAL.

It’s the word “disciple” that’s a sticking point for many. We’re willing to be dilatants of faith, dabblers in religion, admirers of Jesus, and weekend warriors at church. If Jesus had a Facebook page, we would all “Like” it.

Jesus doesn’t entertain dilatants, dabblers, or admirers. He calls disciples. Our Savior has no interest in us “Liking” him. Christ calls us to LOVE him with the entirety of our being. Hold nothing back. Anything less is not enough. We are called to “Go all in and all out for the All in All!” (All In, Mark Batterson, p. 14)

People don’t change, but people can changed by Jesus Christ! In order to experience a year new in more than name alone, ask God to transform your life. Then go ALL IN for the Lord.

May God bless you with a Happy NEW Year!