A group from our church traveled to the Holy Land in 2015. We took a walking tour of Jerusalem on the final day of the tour. Entering the Old City, we walked the Via Dolorosa and prayed at the Stations of the Cross.

The Church of the Holy Sepulcher marks the traditional location of Jesus’ crucifixion and resurrection. Although the claim cannot be supported with historical certainly, Christians have worshiped at this sacred site since the fourth century.

Past the entrance we climbed a stairway on the right that ascended to the site of Golgotha. Under an elaborate altar, pilgrims knelt and touched the rock where the crucifixion took place. The Chapel of Adam is located beneath the altar. Legend claims the blood of Jesus seeped through the rock and covered the skeletal remains of First Man.

A large rotunda left of the entrance houses the traditional site of Jesus’ tomb. I stood in a line winding around the sepulcher. The anteroom contained the “Angel’s Stone” which is purportedly a piece of the stone that sealed Christ’s tomb. A priest stood inside, directing three people at a time to enter the second chamber of the tomb itself.

The low entrance forced us to bow while entering the site of Jesus’ burial. An altar marked the place where Joseph of Arimathea placed the body. We knelt in silent reverence on holy ground. 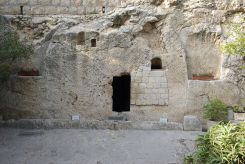 Later in the afternoon we visited a second site claiming to be the possible place of the cross and empty tomb. Golgotha (Calvary in Latin) literally means The Place of the Skull. A British general and amateur archaeologist named Gordon found a rock formation outside Jerusalem’s walls that resembled a skull. He then unearthed a tomb nearby bearing a striking resemblance to the Gospel’s descriptions of Jesus’ burial place.

The Garden Tomb certainly gave us a sense of what the tomb might have looked like. Our British host talked about the various claims supporting the Church of the Holy Sepulcher and Gordon’s Calvary. Finally, he paused and said in true English fashion: “However, ultimately it doesn’t matter which site is authentic. The important thing to remember, you see, is THE TOMB IS EMPTY!”

The Crucifixion and the Resurrection bisect history. History swings on the hinges of the cross and empty tomb. On the far side of Easter, nothing remains the same.

The Easter angel’s words continue to ring down through the centuries and in our ears: Why do you seek the living among the dead? He is not here—he is risen!

God has conquered sin and death. Jesus Christ is the firstborn of the resurrection, and he invites us to receive life, abundant life, and everlasting life. Easter people need not fear the grave because we serve the Lord of Life.

The important thing to remember, you see, is THE TOMB IS EMPTY!

2 thoughts on “The Tomb is Empty”