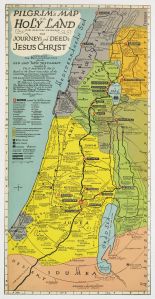 Last year a group from our church joined over 100 United Methodists from north Georgia who traveled to Israel. Most trips serve as enjoyable vacations that provide an extraordinary break from ordinary life. However, the Holy Land trip became a spiritual pilgrimage that transformed our souls.

Scholars describe Israel as “the Fifth Gospel.” The land plays a central role in the Scriptural story, beginning with the Abrahamic Covenant when God promised a future home to the Jewish patriarch.

After returning from Israel, I decided to reread the Old Testament (also known as the Hebrew Scriptures or the First Testament) one chapter per day. Most people skip over the place names as unimportant to the story. However, I determined to read with the Bible in one hand and a map in the other.

Frankly, it’s heavy wading through parts of the Old Testament. For example, genealogies of multiple generations soon blur into a mass of names on the page. Many of the Levitical laws no longer apply. And have you ever imagined the sounds and smells of the Temple as the priests sacrificed thousands of animals?

Some chapters of the story promote a profound sense of depression and melancholy. After finishing 1 and 2 Kings along with 1 and 2 Chronicles, I wondered why God didn’t wash His hands of the entire business. With depressing regularity, the author wrote about the coronation of a new king: “He did evil in the eyes of the Lord.”

The Israelite people didn’t fare much better. God blessed the Jews. Then they constantly went a’whoring after other gods and idols. The people deserted God. They suffered the consequences of their actions. Finally, a faithful prophet or king called the people back to accountability. The nation repented. God restored and blessed the people.

Then the whole sorry cycle started all over again.

The story sounds familiar because it forms the plot of our own spiritual lives. In theory, the Christian life should be a linear journey as we walk in the footsteps of Jesus and grow in faith. In practice, however, we echo the words of the hymn: “Prone to wander, Lord I feel it. Prone to leave the God I love.”

The Lord blesses. We live faithfully. Then temptation arises, and we willfully (or thoughtlessly) wander away from God. We suffer the consequences of our actions. Finally, we “come to ourselves” like the Prodigal Son and realize what has been lost. The Holy Spirit calls us to repentance and restoration. God blesses our lives.

Then the whole sorry cycle starts all over again.

I would love to boast (humbly, of course) about a Christian life that travels steadily upward to the greater heights of God’s kingdom. Instead, a line graph of my spiritual journey resembles a profile of the Rocky Mountains with inspiring heights and depressing valleys.

Although I wish it wasn’t so, we all stumble in our Christian walk. It seems to me that the secret of sanctification is to fall FORWARD. Ask God to pick us up and brush us off. Rather than wallowing in sin and guilt, we are called ever onward as we follow one step at a time in the footsteps of Jesus.