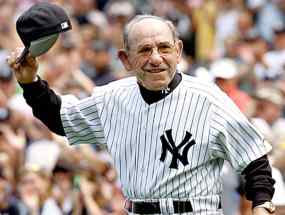 Born in 1925 in Saint Louis, his parents named him Lawrence Peter Berra. Yogi later gained his famous nickname from a friend who claimed he resembled a Hindu shaman (a yogi). His entry into the Baseball Hall of Fame in 1972 honored an exceptional career as a player and coach.

Following his naval military duty during World War II, the New York Yankees signed Berra in 1947. He eventually wore the famous pinstripes for nineteen years on the field and in the dugout. During his career, the Yankees appeared in fourteen World Series and won the title ten times. Berra played in fifteen All-Star games and won the league’s Most Valuable Player Award three times.

After retiring as a player, Yogi first coached the Yankees’ cross-town rivals, the New York Mets. Then he returned to coach and later manage his beloved Yankees from 1976 to 1985. He finished his career as a coach with the Houston Astros in 1992.

Berra dropped out of school in eighth grade and became infamous for murdering the Queen’s English. He possessed an uncanny knack for bending language pretzel-like into unrecognizable shapes. He has been widely quoted over the years, and “Yogi-isms” have become part of our culture. Some of his more famous adages include:

“It ain’t over till it’s over.” The original setting for the quote occurred during the 1973 National League race when the manager said: “You’re never out of it ‘til you’re out of it.” Berra has become so identified with this statement that he claims his tombstone epithet will read: “It’s over!”

“It’s like déjà vu all over again.” Although Yogi wasn’t known for his foreign language skills, he confirmed that he uttered these words after watching back-to-back homeruns by Mickey Mantle and Roger Maris.

“We made too many wrong mistakes.” This insightful observation came after the Yankees lost the World Series in 1960. Wrong mistakes must be much worse than right ones.

Like Mark Twain, no doubt Berra has been credited for many things that he never said. When he tried to set the record straight, however, Yogi couldn’t resist yet another Yogi-ism. He protested straight-faced: “I never said half the things I said!”

It ain’t over till it’s over; and for God’s people, it ain’t never over. Thanks for the memories, Yogi.