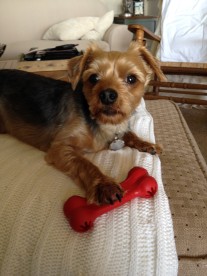 (Bill decided to take a break from his writing duties. The family’s Yorkshire Terrier, Sam, volunteered to serve as today’s guest columnist. Views expressed by the canine in no way reflect the blogger’s opinions.)

What Bill DIDN’T note in his introduction is that I am a RETURNING guest columnist. My first blog appeared back in February. He also conveniently forgot to mention that my post received the most visits ever on his website.

Jealousy is so unbecoming in a human.

I also don’t get the whole “views expressed by the canine” disclaimer. I see the world from eight inches off the floor—of course our views on things differ. DUH!

We’ve been together for almost eight years now. I adopted the family while still a pup. I surprised them on a Christmas morning when Santa brought me down the chimney. Forget electronics, clothes, or jewelry—the best presents love you back.

I don’t demand much in return—kibble, treats, walks, and tummy rubs keep me happy. Humans could learn something about contentment from their canine companions.

My humans insist on treating me to a spa treatment every six weeks. The cosmetician gives me a wash and cut before spritzing me with cologne. Then she ties a bandana around my neck.

I also despise having my nails done. Despite my vocal protests, the woman insists on clipping my paws. One time she tried to buff my nails with a Dremel grinder. A lift of my lip and a flash of my teeth convinced her otherwise.

In a just cosmos, the Top Dog would send pet groomers to their own special corner of hell. Let’s just see how they like having their glands squeezed for all of eternity!

Until I properly trained them, my family experimented with feeding me only twice daily. Puh-lease! I’ve watched the man of the house—he eats three meals a day and snacks in between. Why should I be treated any different?

Even if it’s full, I like to scratch the floor beside my bowl. This informs any human within hearing range it’s time for His Highness to dine. I insist the nearest non-canine top off the bowl with fresh food—yet another endearing practice that my humans adore.

Over the years, I’ve accumulated a basket of squeaky toys. I occasionally treat my humans to a tug-of-war game. I’ve been best friends with Moo-Cow for years. I drag her into the middle of the floor and tear out her stuffing before snuggling together. Love hurts sometimes.

The man likes his routine. Every morning we wake up and take a walk around the neighborhood. Then he tops off my food and water bowls. Before leaving the house, he always takes me outside a second time. Then we observe “Trick and Treat” time.

Humans LOVE to do tricks. After he pulls a treat out of the box, I’ve trained him to hold it over my head and say “Sit!” Then I hold out my paw, and he’s learned to shake hands. Dropping on my stomach cues him to say “Down!” Finally, I allow him to give me a treat.

Like I said last time, it’s a dog’s life, and I’m not complaining. The Great Master in the Sky has blessed my family richly. Between you and me, I believe the Hound of Heaven has a soft spot for canines.

Think about it—“dog” is “God” spelled backwards. Coincidence? I don’t think so!