After touring Jerusalem on the final day of our Holy Land tour, we returned to the Olive Tree Hotel. The group enjoyed a buffet supper before the bus ride to the airport. We arrived at the Ben Gurion Airport in Tel Aviv about 7:30 p.m. local time.

The Israelis take security seriously. As the Bus Captain, I represented the forty-plus people on our vehicle. The Head of Security asked me a series of questions about the individual members. By the end of the intense interrogation, I felt mildly guilty about some unknown offense.

After the prescreening interviews, we presented our credentials at passport control. Then the line led to another security checkpoint where inspectors checked suitcases and documents again.

On the far side of security, duty free stores gave travelers a final chance to spend their remaining New Israeli Shekels. I bought two water bottles for the twelve hour flight. Then I discovered a final security check at the plane prohibited taking liquids onboard.

I traded seats with a group member who preferred a window seat on the Boeing 777. I sat in the middle section on the starboard aisle. In a plane filled to capacity, the middle seat next to me remained unoccupied. God is good ALL the time!

After reaching cruising altitude, the flight attendants served a late supper. For variety’s sake, I tried the crepe entrée. I chose . . . poorly! I spent the flight watching movies, reading books, taking catnaps, and pacing the aisles.

Twelve hours later we landed at Newark Liberty International Airport for the connecting flight to Atlanta. Our church bus took us back to Lawrenceville—THANKS Jeff and Otilio!

I later did the math—it took twenty-four hours to travel from the hotel in Jerusalem to my home in Grayson. I arrived midafternoon in Georgia; however, my body remained on Israeli time seven hours ahead of Eastern Daylight Savings Time.

Since arriving home three months ago, people have repeatedly asked about my favorite part of the trip. How does one summarize such an amazing journey to the Holy Land in a thirty second elevator speech or a 140 character tweet? 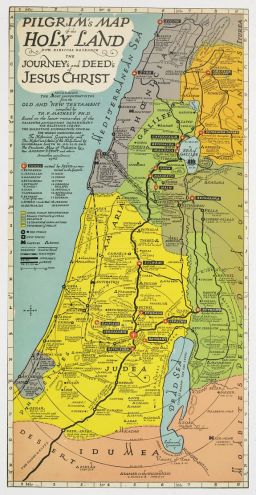 My memories include: baking in the Dead Sea sun . . . climbing the Herodium’s steep slope . . . bowing beneath the Church of Nativity’s low entrance . . . gazing over Bethlehem’s shepherds’ fields . . . boating on the Sea of Galilee . . . praying at the Mount of Beatitudes . . . walking to the high place in Dan . . . eating falafel on Mount Hermon’s slopes . . . descending into the cool grotto of Jacob’s well . . . ascending the hills into Jerusalem . . . walking the Via Dolorosa . . . praying at the Western Wall . . . witnessing Christ’s empty tomb.

The wise on life’s journey discover an important truth. The trip and the destination are certainly important; but it’s those you travel with who make the most difference. Long after the memories of the trip’s itinerary fade, I will still recall the brothers and sisters in Christ who blessed me with their presence.

Since our return, many have expressed an interest in visiting the Holy Land. When the time is right in your life, I strongly encourage you to consider making the journey.

Talk with those who have been—it’s more than a excursion or vacation. Traveling to the Holy Land is a pilgrimage that will radically transform your life and your understanding of the Bible forever.

7 thoughts on “Holy Land Journal #10: There and Back Again”