Our tour group stayed two nights in Galilee at the Caesar Hotel in Tiberius. We arrived on Friday evening as the Jewish Sabbath began. Children ran wild through the lobby while their extended families lined up for the Sabbath meal.

The hotel kept a side door propped open so that devout Jews could keep the Sabbath by avoiding work. Some members of our group accidentally discovered the “Shabbat Elevator” which stopped at every floor, eliminating the need to push buttons. 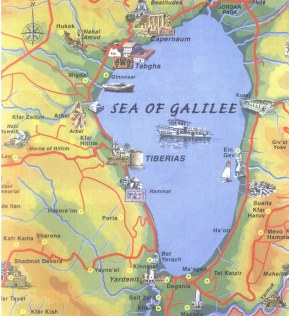 The hotel overlooked the “Sea” of Galilee which is actually a large lake fed by the Jordan River. It measures 13 miles long and a maximum of 8 miles wide. In Hebrew, the lake is called “Kinneret” which means “harp.” Most believe the name describes the shape of the lake, although the more poetic claim it reflects the melodic sound of the wind and waves.

We ate lunch at Kibbutz Ein Gev on the eastern shore of the Galilean Sea. The restaurant specializes in “Saint Peter’s Fish” which is a whole tilapia served complete with head. The squeamish can order a fillet that doesn’t stare back while being consumed!

After lunch, we took a boat ride on Kinneret. In the middle of the lake, the captain cut the engines, and we listened to the wind blowing off the Golan Heights. The waves gently lapped against the sides as the boat rocked like a cradle.

The tranquil scene made it difficult to believe that violent storms can quickly arise on the water. Cool winds from the Mediterranean blow down the narrow passes and collide with the humid air over the lake. Bobbing on the water, I recalled a story set on the Sea of Galilee in the fourth chapter of Mark.

Jesus had spent the day beside the lake, preaching and teaching. As evening fell, he told his disciples, “Let us go to the other side.” So the fishermen in the group launched a small fleet of boats. Exhausted by the day’s activities, Christ fell asleep in the back.

While Jesus slept, the skies suddenly darkened as the demonic wind began to howl. When the storm struck, the high waves threatened to swamp the boats. Even the experienced fishermen onboard were terrified. Meanwhile, Jesus slept peacefully in the back, rocked by the waves like a baby in his mother’s arms.

In a panic, the disciples looked for Jesus. Where was the Master at this moment of peril? If this was a modern movie, the hero would have been at the prow of the boat, leading his friends and facing the elements.

In Mark’s story, however, Jesus continued to sleep in the stern of the boat, blissfully unaware of the disciples’ terror. They rudely shook him awake with the cry: “Teacher, don’t you care if we drown?”

There may not be a more brutally honest question in the pages of Scripture. There are dark, dismal moments in our lives when we all echo the disciples’ cry: “Lord, don’t you care?”

Jesus awoke to the cries of his fearful friends. He rose to his feet and rubbed the sleep from his eyes. Stretching into wakefulness, he rebuked the wind like an unruly child. Then he said to the waves: “Peace! Be still!” And the winds died and the waves calmed. Sudden peace and quiet fell upon the waters.

The Gospels repeatedly reveal Jesus Christ’s miraculous power. He exorcized demons and healed diseases. He cured leprosy, opened the eyes of the blind, and commanded the lame to walk. He called Lazarus from the grave. He fed the 5,000 with a few loaves and fishes. He walked on water. And the “Master of the Seas” calmed the stormy waters.

Our Lord hears our pain and doubt when we cry, “Lord, don’t you care?” And there are grace-filled moments when our eyes see the glory of the Lord revealed. He raises his hand, and the winds die. He speaks, and the waves are calmed. We discover that the Lord does indeed care for us more dearly than a mother for her newborn infant and a father for his frightened toddler.

Miracles occur. The storms cease. The Son of God sustains us so that we see the sun rise out of the darkness onto a bright new day.

On the Sea of Galilee, the Holy Spirit graced me with a God-given moment to remember the story . . . and to believe anew.

2 thoughts on “Holy Land Journal #6: The Sea of Galilee”