The local Board of Tourism bills Jericho as “the oldest continually occupied city in the world.” Evidence indicates people have lived in the area for 11,000 years since 9,000 B.C. By comparison, Christopher Columbus “discovered” the Americas a little over 500 years ago.

Jericho also qualifies as the lowest city in the world, located in the Jordan River valley 850 feet BELOW sea level. (Jesus began “The Parable of the Good Samaritan” by describing a traveler going DOWN from Jerusalem to Jericho.) Since prehistoric times, water from numerous springs along with the proximity of the Jordan River made this a natural oasis for human habitation. It also served as a gateway into the land of Canaan.

Successive civilizations in the ancient city eventually formed a “tel” or “tell.” A tel is a large, dirt mound formed by generations of human occupation. Due to favorable locations based on water and roads, societies tend to build atop previous towns. The artificial hilltops typically feature sloped sides with flattened tops.

According to historians, twenty plus cultures have occupied Old Testament Jericho over the millennia. Trenches dug by archaeologists reveal the strati of previous civilizations. The cross-section looks like a geographical layer cake.

Jericho figured prominently in the Old and New Testament. After crossing the Jordan River into the Promised Land, Joshua “fit the battle of Jericho” at this site. The Israelites circled the city seven days before the walls collapsed.

Later the prophet Elisha purified the town’s water supply with salt. The free-flowing spring still spouts water into the air at the bottom of the tel.

Jesus also visited the New Testament site of Jericho which was located west of the modern city. On the outskirts of town, a blind man cried out to Jesus and regained his sight. Jesus and the disciples continued into town where the Lord encountered Zacchaeus perched in a sycamore-fig tree.

Just beyond the city a north-south mountain range divides central Israel. The Mount of Temptation towers over Jericho to the northwest. In the Middle Ages, the Crusaders identified this site as the “high mountain” where Satan tempted Jesus with all the world’s kingdoms. Later the Greek Orthodox Church built a monastery there. Today cable cars go halfway up the mountain to a restaurant and shops.

The experience made me recall the punchline of an old preacher’s joke. One day a minister overheard a church member praying out loud: “Lord, lead me not into temptation—I can find it quite well on my own!”

Moral of the Story: Wherever we go, temptation always beckons because we carry ourselves with us.

After lunch, our bus driver and guide took us to a nearby plaza where a camel lounged in the shade. For $5 a person, the owner offered us the opportunity to ride the camel around the parking lot and pose for a photo op.

I rode a camel thirty-five years ago, and I never forgot the odiferous experience. I learned early in life that some things just don’t have to be done twice!

Camels enjoy a well-earned reputation as ornery, cantankerous creatures. They spit, hiss, and bite—and that’s just on the front end! However, plenty of volunteers climbed on the ungulate and took it for a spin.

The best part of the experience? The camel rides occurred on WEDNESDAY. So we all stood around shouting, “Hey, Mike, Mike, Mike? Guess what day it is? It’s HUMP DAY!”

That’s FUNNY, I don’t care who you are! 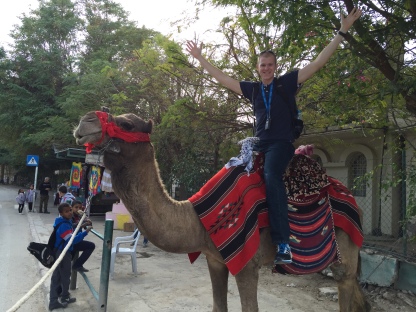 Andrew E on a Camel

2 thoughts on “Holy Land Journal #4: Jericho and the Mount of Temptation”